from Laura Hinze Lofgreen at http://mydeartrash.blogspot.com/2015/

The Safest Place in the World – A Vivid Reality

I’ve had this thought running through my mind for quite sometime.  Being pregnant has pushed the barriers of my mind and heart.  Mentally, there is no way to comprehend what the body can do.  Create a baby?  Really?  The miracle of birth and the love for your new baby completely changes the world.

We all arrive here on this planet the same way.  It is through our mother.  Some mothers keep their baby, others may adopt them out, some mothers abandon their baby and then there is the mother who terminates her pregnancy through abortion.  No human being has ever arrived on earth another way but through her mother.  What does this say about our role as woman?  As mothers?  What does it say about our own life and the idea that our mother placed our birth as a priority?  In all the powers of the universe, it appears the womb of a mother is one of the most productive, creative and miraculous places ever in existence.  But is it the safest?

About a year before becoming pregnant with this 6th baby, the counselor and I researched an international adoption; specifically from India.  My heart is drawn through dreams, prayer and visions to a little brown-skinned brown-eyed girl.  I know her and love her.  Adoptions from India are difficult, expensive and can take many years to process.  Some websites say you have to live in the country for months before becoming eligible.  Another website says India has nearly stopped adopting out girls because many girls have been turned into slaves or sold.  Sexual abuse is rampant.  More research told me adoption was only open to families with three or less children and another said the counselor and I were too old.  A personal dilemma I have is the fear of flying.  India is very far away.  Yes, adopting from India seemed like an impossible climb.  Then, I became pregnant.  I know I am getting the baby God intended me to have, but what about this beautiful little girl I loved and desired.  Could it be my desire to save any girl – all these little girls!  I think it might be.  My heart aches to comfort even one of them.

I have done research on the customs and cultural practices in India, China and other countries.  These countries are beautiful in many ways through cultural and tradition, but there is a dark side.  The desire to have male children puts many unborn and newborn baby girls at risk of abortion, gendercide and infanticide.  Female feticide is the act of aborting a fetus because it is female. I remember when I first heard these terms, wondering if they were real.  Was there really such a thing as infanticide – the crime of killing a child within a year of birth?  I have a college degree and stay current with world news.  I follow child development issues and world health.  Why had I never heard of such things?  I hear of racial tension and homophobic accusations, terrorism and political unrest.  There’s a group fighting capitalism on Wall Street, but where are those demonstrating the injustice of millions of baby girls being killed each year?  I’ve had to dig for information about this as it is not in the mainstream media.  According to International Business Research:

“Across South Asia, untold numbers of infant girls have been murdered by their own families throughout the centuries. In the modern world, the phenomenon of ultrasounds and gender-selective abortion has introduced a new method of perpetuating this ancient killing machine.

Baby girls are considered a curse and a financial burden, especially to poor, rural families who must cough up expensive dowries upon their marriages, while boys are usually counted upon to take care of their parents during their old age.

Human rights activists in both India and Pakistan have long expressed their outrage over biases against infant females, to little avail.”

Another source says  “Many pregnant women abort their unborn child as soon as they find out it is a girl. According to a study, up to 8 million unborn females may have been killed during the last ten years.  Human rights organizations are accusing the government of not doing enough to stop the abortion of girls. Abortion is legal in India up to the 12th week of pregnancy but the sex of a child can be determined only much later. In the past clinics that can determine the sex of a baby through ultrasound examinations have emerged. Some of them offer package prices for tests and immediate abortions if they show that a girl is on the way.”

I’ve been reviewing/editing with my mom author Sarah Hinze the 15th anniversary edition of her best-selling book The Castaways – Real-life Accounts of Aborted Souls.

The stories she’s collected for almost 30 years provides real evidence that unborn children can warn, protect and enlighten us from another plane of existence. But what about abortion?  If a soul lives in a state of existence before it’s born, what happens when his/her attempt to come to earth is terminated through abortion?  Does this soul live on?  The research says yes!  The term “castaway” was coined and now in many ways, my mom is honored to share their stories.  Never political or religious, my mom simply shares stories of dreams, memories or experiences from those who remember their own abortion.  In some cases, these castaways have been re-assigned to a new family.  There are mothers and fathers who have seen in dreams, memories or experiences those facing, experienced or been reassigned to another family because of abortion.  Such experiences bring much needed healing and awareness to those who have been emotionally/spiritually/physically hurt through abortion.  Like my mom, my feelings about abortion are not political – they are spiritual.

Author of The Gift of Giving Life Lani Axman

Lani Axman says “. . . I had never heard of “castaways.” I didn’t know anyone who talked about them. Finding and meeting pre-birth expert Sarah Hinze in 2010-2012 was surely no coincidence. Sarah has been a sort of lone voice in the wilderness for the past few decades, sharing her growing pool of case histories about previously-aborted children. She herself was highly skeptical at first. A couple of years ago, Sarah handed me a story that had clearly been typed decades ago and said, “I think this was the first abortion story I ever received.” She shook her head, saying, “I couldn’t believe it was true.” So she had put it away in a file, feeling sure it was an anomaly among pre-birth accounts. But then she received others, and that pushed-aside file started to grow.”

Since meeting my mom, Lani has meet “many people who have discovered a “castaway” in their family. I knew that the ranks of previously-aborted children coming to earth were growing, but I was still unprepared for the outpouring of witnesses I received.  Though the idea (of aborted souls being given second chances at life) is still far from mainstream, more and more stories are coming out of the woodwork.”

Lani continues “As more and more of these brave and valiant spirits try to make their way to earth again, the powers of darkness are heightening their efforts at preventing their entrance. Personally, I believe that many of these spirits are God’s strongest “warriors.” Satan doesn’t want them here, and he certainly doesn’t want people acknowledging their existence. Revelation chapter 12 takes on new meaning as we consider the vast number of previously-aborted spirits seeking entrance into mortality: “And the dragon stood before the woman which was ready to be delivered, for to devour her child as soon as it was born” (vs. 4).

I think of the safe place my unborn child is growing.  I think of the tender way my doctor has cared for me.  I think of the concern of others and well wishes and consider in another circumstance, his life could be terminated for no reason but he isn’t wanted.  He isn’t considered human while in the womb.  He doesn’t have the same rights I have even though he is created the same way I was.  For if we all are given life the same way, to block one child’s life is to block our own.  And then to consider 8 million little girls aborted in India is more than my heart can bear.  I’m not sure what my role is in helping these little girls.  And what my little India princess?

Since 1973 when Roe vs. Wade was passed there have been nearly 57 million abortions.  My heart is so tender to those precious ones who have been aborted.  If my path to existence was not blocked, why should others?  Shouldn’t they have the same rights as those of us living?  It leads me back to my question “What is the safest place on earth?”

Shouldn’t it be a mother’s womb?

You think of the far reaches of the universe and the chaos of shooting stars, moving milky ways and comets stretching from one end to another, yet here we are on earth we call home.  You think of the chaos of wars, natural disasters, calamities, terrorism and genocide.  So much of life is out of our control, but what about the sacred place our unborn children grow?  Yet, it is not.  With all the rights of woman, especially in America (knowing they are very limited in other parts of the world), when does a woman compromise on the rights of her body?  Her child?  Think of what a woman will do to save/protect her child.  She will run in front of a moving train, lift a car and even give her own life.  So what about a developing child?  Why is it so difficult to visualize a real child in our womb?

More wars for life are fought in a mother’s womb than any where else in the world.  Where is that documentary?  Who will arm our unborn children?  Who will fight for the rights and freedoms of those little girls of India?  If God will show me the way, I will.

I think of my own little girl Eden,whose life is celebrated because she is a girl.  She is surrounded by 4 big brothers and a little brother due in 3 weeks.  Her beautiful feminine spirit fills our home.  My big boys nurture her in such beautiful ways.  They are tender and gentle to her.  The love I feel for her seems to nurture my own feminine spirit.  She truly is our princess. 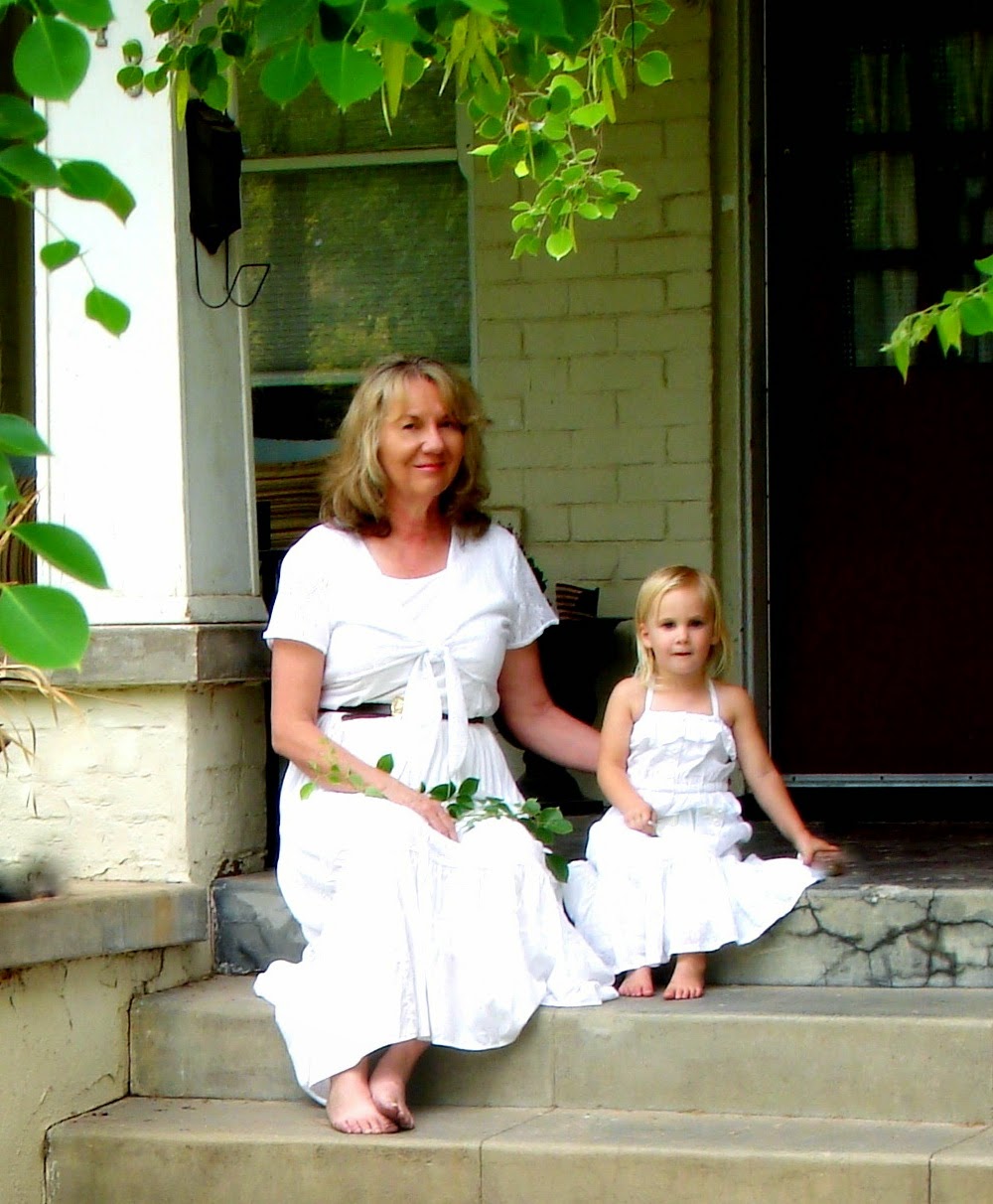 (My mom with Eden)
Someday she feels small; she is just one voice for millions who have none.  If you have a story you’d like to share, you can contact Sarah Hinze at sarah@sarahinze.com.  The 15th anniversary of The Castaways is scheduled to be published soon.  I will keep you posted.
My mom and I have authored a book together called The Memory Catcher (2012).  It is the story of her life and how she became the world’s leading researcher on prebirth experiences.  Orders can be placed by e-mailing mom at sarah@sarahhinze.com  All of her books are on sale now through April for $8 plus $3 shipping.  Books signed at your request.
Share on FacebookShare on TwitterShare on Linkedin
Posted in Abortion, Angels, Uncategorized