Mesa author writes of souls before they come to earth 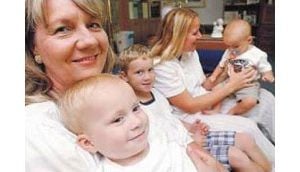 WHERE DO THEY COME FROM?

It makes perfect sense, Sarah Hinze believes. If we have souls when we dwell on earth, and our souls go on to heaven after death, then what about our souls before our conception and birth? Where did our souls come from?

The Mesa woman has spent almost 20 years gathering stories and publishing books about preearth or pre-mortal lives — especially how parents have experienced visitations from their yet-to-be-born offspring. “I Knew My Children Before Birth” is the first chapter of Hinze’s newest of five books, “We Lived in Heaven: Spiritual Accounts of Souls Coming to Earth.”

“Before each of our nine children was born, I sensed that he or she was preparing to come to earth,” she writes. “. . . As my respect for motherhood grew, I received the gift of increasing visits from my unborn children. I could feel that each child had a unique personality and that it was their time to come to earth with a personal mission only they could fill.” So it is with all humans, said Hinze.

Hinze calls pre-born children “morning stars,” based on Job 38:4 and 7: “Where wast thou when I laid the foundations of the earth? . . . When the morning stars sang together and all the sons of God shouted for joy.” She also calls them “royal children.” A hynotherapist, she has named her services Royal Child Counseling.

The best-known accounts, Hinze said, are two biblical stories: The angel Gabriel’s visitation to Mary, mother of Jesus (Luke 1:26-38) and the story of an angel visiting Zechariah and his aged and barren wife, Elizabeth, who would become pregnant and deliver John the Baptist (Luke 1:5-25).

With the publication of her first book, ”Life Before Life,” in 1992, Hinze became a pioneer in scouring the Bible for references to pre-born beings and unborn souls, and chronicling widely varying stories of the appearances and encounters people say they had with what later turned out to be their children or grandchildren, including aborted or miscarried babies who were eventually born. She has compiled hundreds of stories from numerous cultures around the world.

“If you have dreamed about, sensed the presence of, heard or seen a child, grandchild, brother or sister before that person’s conception or birth, you may have had a prebirth encounter, or PBE,” Hinze writes. In some cultures, it is so common that it has been named “an announcing dream,” she said.

Hinze, 57, had her most vivid experience with her fifth child, Sarah Rebekah. “After the miscarriage (following a three-month pregnancy), I had a very profound dream that she would return because I had bonded with her,” said Hinze.

“I was shown in a dream that I had only lost this girl child temporarily . . . that she would have a second chance for birth through me,” Hinze writes. There were rich images of brown hair and inquisitive brown eyes and a vow by the child to come to earth eventually. In the next pregnancy, Hinze said miscarriage seemed imminent again.

In her fears, she said she fell to the floor and pleaded to God to spare her fetus. What followed was a vision of her own “spirit-self” amid brilliant light and space travel past stars. Eventually she found herself back on the floor, “immersed in the love of this great being” conveying words that “I am the Great Physician. I will heal your body, and this baby will be born whole and well.”

Months later and with more encounters, she delivered Sarah Rebekah, “the sweet baby of my dream, whose earthly body had miscarried on the first try, now returned to earth as promised, our mortal child.”

Through the years, Hinze has spoken widely. She tells stories about how actor Richard Dreyfuss recalled being hospitalized after 20 years of drug and alcohol addiction. “As he sobered all alone in the hospital room, there entered a 3-year-old girl in a pink dress . . . (who) told him, ‘Daddy, I can’t come to you until you come to me. Please straighten out your life so I can come.’ And she was gone.” Dreyfuss would say the incident caused him to reorder his life, Hinze explained. Within three years, his wife delivered a daughter, “the same girl who came to his hospital room.”

“I feel it is so important for people to understand the great divinity of these unborn children that are waiting to come,” said Hinze, who has worked closely with many death and near-deathexperience writers, including the late Elisabeth Kubler-Ross and Paul Perry.

In her fourth book, “Songs of the Morning Stars,” Hinze writes that “just as we grow and learn on earth, in the premortal realm, we each acquire knowledge, wisdom and skills that we bring to earth with us — a partial explanation for childhood precociousness, aptitudes, traits and savant talents. We come down when we have earned the right to graduate to earth school and undertake this physical realm.”

She founded Changing Hearts Foundation, which gives seminars to promote the sanctity of life, change minds when abortions may be under consideration, promote adoption, comfort those who have lost children through miscarriage, and “increase the desire to bear and love children.” Sarah gives books free to anyone who is considering or who has had an abortion.